Knowledge sharing and an up-to-date approach: an IT company from the employees’ perspective

I wish I could work on this...

Knowledge sharing and an up-to-date approach: an IT company from the employees’ perspective 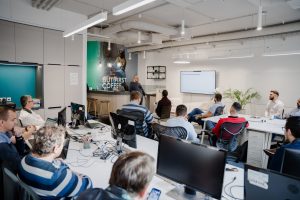 „I feel like I have found a place where I belong. UpScale provides me what I had at my previous workplace: the multinational atmosphere and all the agile perspectives, and maybe even more,” says Tamas Kiss, backend developer at UpScale. Tamas studied at a new wave software developer school, after which he worked at a large US multinational company, from where he went to UpScale.

„Having worked at two major banks, I’m used to the atmosphere that banks provide. Then I started at UpScale eight months ago, also working on a bank-related project. My position here is IT Business Analyst, more specifically we are currently working on the corporate internet bank, which is a large-scale project with many exciting professional challenges,” says Bela Tamas.

You can work even from the other side of the country

Although the pandemic and technological advances have led many companies internationally to switch to hybrid or even completely home-based remote working in the last two years, in our country we rarely see examples of the latter, at least not permanently, because many companies preferred to send their employees back to the office with the end of the pandemic. At Upscale, however, it is possible to work from another city.

“I used to work for companies in the rural part of the country, and I’ve been here at UpScale since the beginning of the year as a Flutter developer,” says Janos Dobszai, who works in a so-called full remote position at the company, i.e. he doesn’t go to the office in the capital, but works from home. “For me it was a positive thing that it was very easy to integrate into the team. I didn’t feel isolated at all just because I was working alone at home; everyone was very friendly and helpful, I was able to integrate well and quickly. Even the welcome was very nice: on the very first day, my colleagues introduced themselves one after the other, helped me with everything, invited me for lunch with food delivery service. In the weeks that followed, I received several phone calls from Szabolcs Pinter, the manager, asking if everything was going well, if he could help me with anything, and how I was feeling,” he says. These human moments, in addition to the professionalism, were very convincing.

UpScale places a high value on knowledge sharing, which is why they organise meetups for those interested, for example. Their next meetup, “Data management 13.0”, will take place on 12 May 2022 at 6pm, which already has nearly 150 registrations: the elite of the tech community targeted by the event were delighted by the idea to finally have a few drinks together in person after all the online events. Among the speakers at the meeting will be Zoltan Laszlo, Java Backend Developer at UpScale. “I will talk about TiDB at the meetup, demonstrate the Proof-of-Concept-like use of this so-called NewSQL database, and talk about my experiences”, says Zoltan.

Zoltan thinks that TiDB is trendy, but he has a good reason to believe that. “In cloud-native development, the NewSQL direction can bring together the advantages of classic relational databases with the positives of NoSQL database solutions, such as ease of operation in the cloud. The prerequisite for this is distributed and fault-tolerant operation, as well as horizontal scalability in terms of compute and data storage tasks,” he explains. “With the old classic relational databases, it was more like you bought a large hardware, it worked as it did, if you needed something more powerful, more storage, you had to buy more. With the cloud, you have different requirements, the cheaper you can make it, the more you can grow it in proportion to your usage. You don’t need to buy a 100 million hardware dedicated for such a system, it can be installed in any server environment, and it can run comfortably in the cloud. NoSQL databases provide a solution, but their deployment is typically fundamentally different from that of relational databases. What we like about relational databases is that they have a strict scheme, a normalised data structure, you can write arbitrary queries in it, and they provide ACID guarantees. NewSQL databases like TiDB try to combine the best of both worlds,” he says.

It’s not the only relatively modern technology that they’re looking at and working with. Janos works as a Flutter developer. “It’s a relatively new cross-platform front-end technology, you can develop an app for iOS and Android from a code base. We’re also now piloting a web application, also with Flutter. I’m really happy to have the opportunity to experiment with new things like this,” he says. What Janos really likes about Flutter is that you can target so many different platforms in one code base – you can now develop desktop applications in it – because you can save a lot of resources. “You don’t need separate development teams for each different platform, you don’t need to coordinate them or develop separate codes,” he explains.

Of course, they also have banking clients, where they are dealing with proven, stable technologies. “For the day-to-day banking functions we use the Akka framework, the backend itself is Java – but we also have a team developing in Springboots – and for the infrastructural elements we use Cassandra, Redis, Kubernetes,” Tamas lists. “If you want to try the latest technology, there are very good opportunities to do so at UpScale. For example, I worked on the graph database Neo4J, which I presented to the others at an Upscale beer session. I’ve also worked on microservice orchestration systems,” he says. The professional beer sessions are regular, with themes on a pilot basis; the next few sessions will focus on cloud technologies, for example. While the epidemic was still going on, it was possible to bring beer from the office, and colleagues were drinking it online, while they were chatting about work.

“Right now, what I’m experimenting with is serverless technologies, including AWS Lambda. Much of the development in the microservices world is about bringing operations and infrastructure things into it. In the serverless world, they are trying to make sure that we put as little emphasis on that as possible, that we just develop the business logic and they take care of the infrastructure part,” says Zoltan, whose next project will be about this technology. In addition to professional events, they also organize webinars and write a professional blog, with more than 20 entries to be added to the redesigned website in the coming days.

Continuous training – at your workplace

“Tomorrow I need to know more than I know today, IT people have a motto like this,” says Bela, and everyone else seems to agree. In this light, it’s not surprising that UpScale has a continuous training program. “I am currently on a six-month training course. Classes are during working hours, two hours a week, on Fridays.” It’s an online training course, put together by an American company, at the end of which a Business Architect certificate is awarded to those who pass the exam. “The main topic is how to capture a business demand from an IT perspective. How we can architecturally implement it. I have completed half of the course already, I still have the other half to go. It’s also a softskill training course. The big problem for Business Architects is what happens when a business department writes down two sentences on a paper and you have to develop something usable from that. The training also gave us answers on how to communicate well, how to ask the right questions,” says Bela.

“The whole profession is constantly evolving, very quickly, so you have to keep learning, you have to keep up your interest in the profession somehow,” says Tamas. “For me, it’s a fresh experience: I’ve just finished my training, a Springboots framework session, partly online and partly in UpScale’s office. We plan to present what I’ve learned and try to integrate it into the system,” he says.

Zoltan recently attended a Kubernetes and Istio Service Mesh training. “The Kubernetes part wasn’t that new, but it was still useful, it broadened my horizons. The other half, the Service Mesh technology, which is trying to be used to make microservice infrastructures more maintainable and easier to operate, was also new to me. The demand for it has started to emerge in the last few years,” says Zoltan.

They also care for the environment

At UpScale, in addition to the above, they pay particular attention to complementing professionalism with social action. “UpScale organises events where you can also bring family members, such as tree planting. In my previous jobs, I didn’t really have such environmentally conscious events, so it feels good to be able to do something for the environment,” says Tamas. The company has joined the MyForest charity’s campaign. MyForest provides the venue, people at UpScale provide the volunteer work. They also try to show the outside world that they care about the environment. “At the last job fair, it wasn’t a commonplace gift that was handed out to attendees: we gave them strawberry plants. We were referred to as the strawberry stall and it was a great success,” says Bela.

Social issues are not the only ones they are involved in. Although these actions are promoted by the management, colleagues also self-organise. They have been to blood donation as well as collected donations for Ukrainian refugees and even sent non-perishable food across the border.

Interested in Data Management? Then we have a good program idea for you! Register for our Data Management 13.0 MeetUp on May 12, 2022. Our presenters will start with Gyongyi, who will talk about Data Management solutions - followed by a panel discussion with Laszlo Csite, Lorand Peter Kasler, Marton Kelemen and Jozsef Szoke. Finally, UpScale's Zoltan Laszlo will present our TiDB NewSQL POC.

Modern technologies in an Enterprise environment

AI - the solution UpScale presentation Banking Technology 2021 / Portfolio conference October 13, 2021 - Corinthia Hotel Key points of the presentation: Artificial Intelligence (AI) can be a real competitive advantage for large corporates / large financial institutions with an extraordinary amount of data at their disposal. However, AI is more than an analytical tool and its implementation requires a proper approach. The modernisation of legacy systems, the next generation databases, the holistic use-cases and AI's well-defined role in business processes are all important elements of a well thought-out strategy.

We provide professional solutions to your issues.

Please, visit our carreer page and check our latest positions!